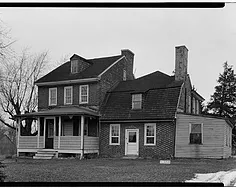 Bellmawr is a borough in Camden County, New Jersey, with a population of ~11,600, and is 3.110 square miles in area, and the 12th largest municipality out of 37 within the County.  Bellmawr was incorporated as a borough on March 23, 1926, from portions of the now- defunct Centre Township, based on the results of a referendum held on April 21, 1926. The Boroughs of Mount Ephraim, Runnemede, and Lawnside were also created in the same two-day period. The borough was named for Ernest C. Bell, who own and operated Bell Farm. Bellmawr’s motto is Progress Never Stops.

​For more information, check out Bellmawr’s profile on Wikipedia.

Once serving as a long- time reminder of Bellmawr’s colonial past, the Hugg-Harrison-Glover House (pictured above), a patterned-brick building nestled in the back of St. Mary’s Cemetery, stood the test of time for well over two centuries.  Unfortunately, in the late Spring of 2016, the NJ-DOT demolished this landmark with the construction of the “Direct Connect” highway expansion improvement program. The house was originally owned by the Hugg family, who purchased hundreds of acres between Little Timber Creek and Big Timber Creek beginning in 1683.  In those days, the rivers acted as the main highways, and here along the waterfront the Huggs established a landing, a store, and brick kilns on their tidewater plantation. Then in 1751, the Harrison family acquired the house and the land, and added the 1764 brick portion.

Bellmawr in the American Revolution

William Harrison Jr. was such an ardent supporter of the American Revolution that he mortgaged his property and his grist mill to raise money to form the Gloucester Town Militia, of which he served as captain.  From his home along Little Timber Creek, William Harrison found himself in the center of Revolutionary action. On October 22, 1777, Hessian troops marched across Harrison’s mill dam as they headed to attack Fort Mercer in the Battle of Red Bank. Despite initial victories by the Americans, eventually the fort was abandoned as Cornwallis approached with seven thousand soldiers.  When Cornwallis arrived in Gloucester Town on November 25, 1777, the Marquis de Lafayette and his troops (including Captain Harrison’s company) rode down King’s Highway towards Gloucester Town. Encountering an outpost of Hessian soldiers, Lafayette and the American soldiers attacked them and drove them back towards Gloucester Town. Known as the Battle of Gloucester, part of this skirmish was fought on William Harrison’s own property.

As a result of Captain Harrison’s role in the battle, the British burned one of his houses in Gloucester Town.  To add to his sorrows, eventually William Harrison’s debts led to his property being sold at sheriff sale. The house then passed to the Tomlinson family in 1785, to the Glover family in 1835, and finally to the Diocese of Camden in 1921 to be used as the offices for New St. Mary’s Cemetery, now serving a new generation of immigrants, the Polish Catholics.  From its earliest days, this house has always stood beside the path of major transportation routes, whether flatboats floating on Little Timber Creek, Hessian soldiers marching down Haddonfield-Gloucester Road, trains traveling along the Camden County Railroad, or cars merging between I-295, I-76, and Route 42. The Hugg-Harrison-Glover House once stood as a vital link to the colonial and rural past in a region that has been overwhelmed by modern development and urban sprawl.

For more information on Bellmawr’s role in the American Revolution, click here.